BusinessTimes.top
BusinessTimes is for folks who likes to get updated before others about latest news of Stock Markets, Business News, Personal Funds, Currencies and Much More. If you have any kind of questions, please feel free to ask by contacting us. 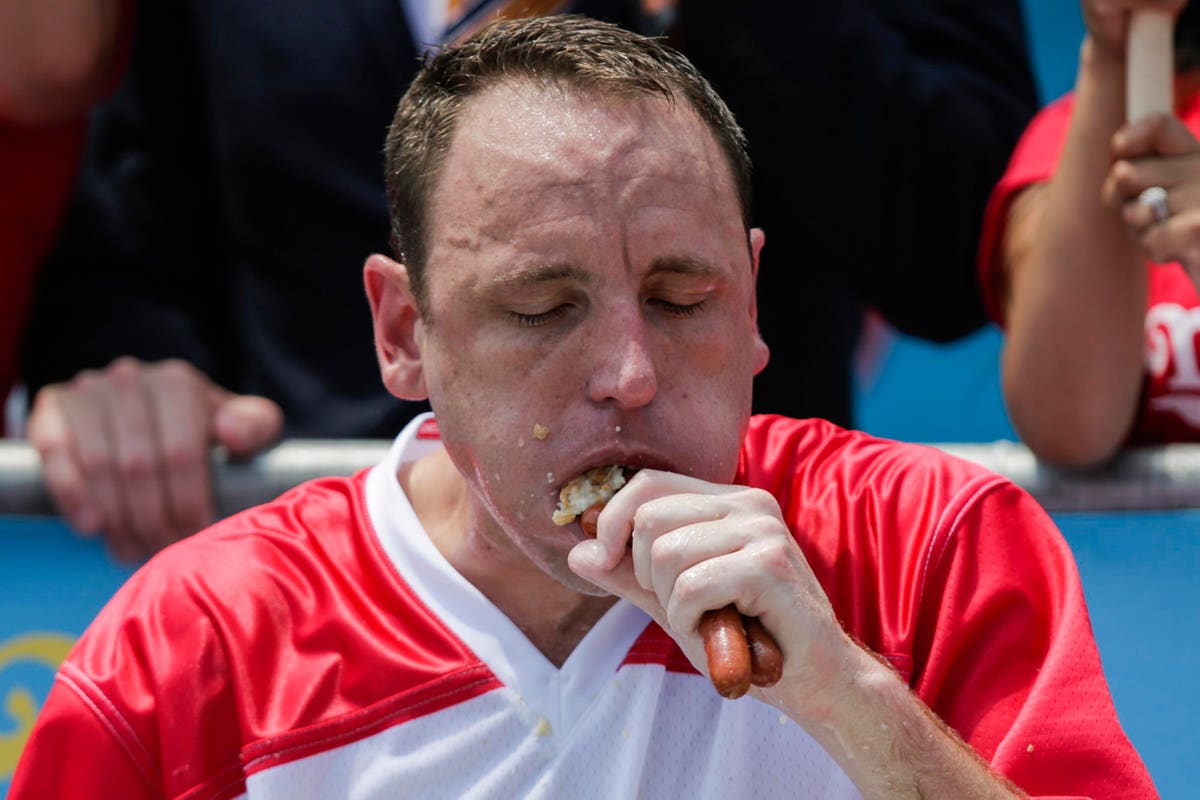 This July 4th, the highlight of my TV watching was Nathan’s Hot Dog Eating Contest 2021. I don’t know about you all, but MLE (“Major League Eating”) is a lot more fun to watch these days than other organized sports, not the least because it reminds me of what’s happening in the world of major league central banking (“MLCB”).

Despite their vigorous opposition, I had my kids turn off their video games to watch Joey Chestnut beat his own previous world record of 75 hot dogs and buns in ten minutes to win a 14th title. For quant aficionados that’s 7.6 DPM (dogs per minute). To me, this is a feat that is simply incomprehensible. As a card carrying scientist, I just had to research the techniques behind this incredible feat, and my research led me to documentary evidence on the legendary battle for supremacy between Takeru Kobayashi of Japan and Chestnut going back almost two decades.

While watching documentaries on speed eating, I learned a bit of the science behind speed eating (here is a great link to some of the factoids). It is just mind-blowing, to say the least, how geometric precision, pre-saturation by dunking, and every plate to mouth movement is practiced and choreographed. There are even instances where the eater is ready to hurl out the ingestion, but if a true champion, can regurgitate even that! The sport is not at all about eating in the sense most mortals think of food, but about speed and volume. Quite simply put, the physiological response of a competitive eater is entirely different from a normal person. For example, the stomach of a major league eater expands by 400% of its original size, and does not initiate the STOP EATING NOW response that you or I would have. Pushed far enough, I would probably gag in a few single digit count of hot dogs, but a superstar eater can train to suppress this response.

The four largest central banks of the world are engaged in their own hot dog eating contest, and each is trying to set a new world record – all the stops are out. We are speaking trillions of bonds eaten at a speed of hundreds of billions of bonds per month (BPM). Led by economic dogma and doctrine, and empowered by rallying asset markets, they have become emboldened to inhale more and more bonds, in many cases by multiples of the outstanding net supply.

The “science” and the rhetoric also keep evolving with the contest as new, just-in-time innovations to defy the gravity of debt are rediscovered. For example, the US Federal Reserve adopted flexible average inflation targeting (FAIT) to allow them to keep interest rates at rock bottom and maintain $80 billion of Treasuries and $40 billion of mortgage bond purchases even as stock, bond and housing markets all reach record high prices (Source: Federal Reserve). The European Central Bank, not to be left behind, abandoned its inflation philosophy to adopt a brand new one that will allow for inflation to overshoot. The Bank of Japan, the reigning champion of competitive bond gorging, has a debt that exceeds its GDP by a large margin and is for now, also the reigning champion of government sponsored buying of stocks. Just like the legendary battle between Kobayashi and Chestnut, what the Japanese invented decades ago in terms of quantitative easing has now made it mainstream sport for the other competitors in the central banking field.

Biden’s Stock Markets Have Not Crashed As Trump Predicted

Growth Will Slow Faster Than Expected…Say The Data

Student Loans Bill Of Rights May Be Coming To Your State

I am not able to write in this forum details of the aftermath of the hot dog eating contest. For most of us the hot dog competition is in itself such an awe inspiring act that we probably don’t even want to ask or know what happens next. But just a few searches on the web have graphic and gory details (search for videos by one “Furious Pete”). Fortunately, the aftermath of the bond gorging is equally predictable, though (slightly) less nasty in its details.

At some point, and no one knows when, the massive amount of debt that has been built and eaten by central banks will have to be disgorged, even though MMT (modern monetary theory) claims there is no such limit unless there is inflation. There are three ways this can happen. In the first, and most chaotic approach, central banks just quit eating new bonds or even start thinking of selling their holdings. In the second approach, they don’t stop buying bonds, but indirectly create a debasement of the currency in which the bonds are denominated. In the final approach, they exchange their bonds for other assets. From the perspective of markets, the first approach results in a rise in yields and a fall in prices. The second approach results in competitive devaluation of currencies, and in the third approach, other asset classes, such as equities, benefit from the flows out of bonds. In all three cases, it is hard to argue for holding bonds as long term investments. For an in-depth discussion of today’s bond market ecosystem and the role of central banks, please download a free copy of my recently published CFA Institute Research Foundation monograph on the upside-down bond market (here).

On the last approach of substitution let me remind you that there are competitive eating contests for hard boiled eggs, pizzas, tacos, cow brains(!), lemonade…you name it. Some central banks are also already on to the next game of buying other assets. The BOJ has been buying equity ETFs for quite a while now (Source: BOJ).  The Fed and ECB have already shown their interest in buying corporate bonds. It is a matter of time before they all start to compete in these other contests. And why not, if asset purchases all the time have no negative consequences?

So, faced with the ongoing competition to acquire assets by central banks, what is the best strategy for investors? First, and I repeat the warning of contest organizers: “don’t try this at home”. Leave hot dog speed eating and bond gorging contests to the pros. Take my word that it is foolhardy to try to beat Joey Chestnut at hot dog eating before the contest starts. But perhaps, right after he has set the world record (now at 76 HDB – hot dogs and buns), and has won the contest, it could be worth challenging him to a competition for perhaps half a dozen more. One might still lose the contest, but the odds seem way better. I sense that we are getting to the same point in the bond markets. Central banks are ready to declare victory, and weak hands trying to fight them have capitulated. Many central banks have already begun to pivot toward tighter monetary policy outlook even as they keep buying bonds. As in hot dog eating, timing is critical in the markets too, and the best time is when the champ is stuffed to the gills.

Biden’s Stock Markets Have Not Crashed As Trump Predicted

Growth Will Slow Faster Than Expected…Say The Data

Student Loans Bill Of Rights May Be Coming To Your State

Blood Pressure And Alzheimer’s —A Glimmer Of Hope

What Has Been Driving Akamai Technologies’ Performance?

Is Buying An Annuity In A Zero Interest Rate Environment A Good Idea?

‘Retirement’ Might Be At An End – But Aging And…

How Parents Can Use Back-To-School Shopping As A Financial…

Recent Drop In Mortgage Rates Might Not Be The Last, Experts…

Is This The Golden Age Of The American Family Vacation?

Stocks Fall As Another 2.4 Million Americans File For…

The Big Surprising Cost In Retirement No One Plans For, But…

How The Parts Add Up: The Vanguard Mega Cap Growth ETF…

Community QE – An April Game Plan for States and…

Medicare Will Now Pay For Acupuncture In Part Due To Opioid…

Mercedes-Benz Stadium Is Ready For Its Super Bowl Closeup

Here’s How Much The Lockdowns Are Costing

Following Your Second Act Dreams When The World Says Don’t

How AI Is Making Buildings Smart And Intelligent

From Pullback To Nasdaq: How Proptech Startup Porch Used A…

How To Design Your Bedroom For A Better Night’s Sleep

Here’s Where The Next Netflix Or Tesla Will Come From

Why Won’t Congress Ease Medicare Enrollment For Those Not…

U.S. Economy Unlikely To Recover As Rapidly As It Collapsed

The Truth About Post-Corona Retirement: We Simply Don’t Know

Just A Matter Of Time Before Skechers Stock Recovers To $38?